In the API Portal you manage how you consume Lantmäteriet's APIs. This involves you creating applications and subscriptions for the APIs you wish to consume and generating API Keys to configure your software with.

The API Portal is available in the following environments:

At the top of the page there will be links with different functionality:

After signing in, all APIs for which your account is authorized to see will be displayed. If you believe an API is missing, please contact Geodata-support to place an order for the correct authorization.

Click on an API to display it's overview page, see the example below and notice the navigation menu to the left of the screen: 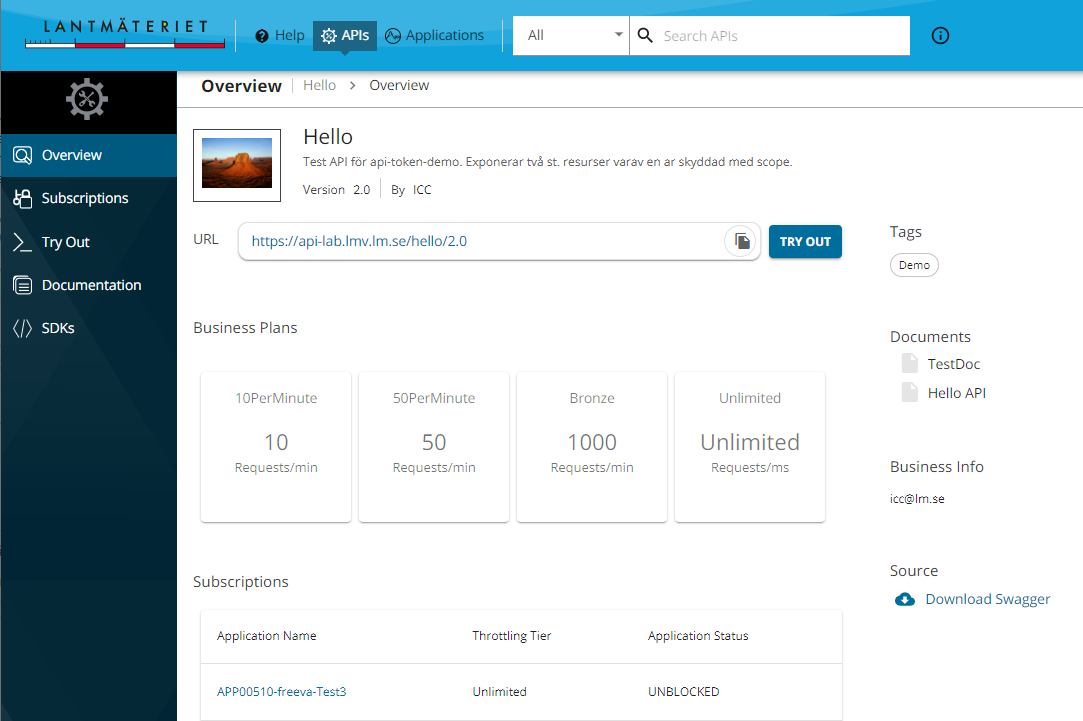 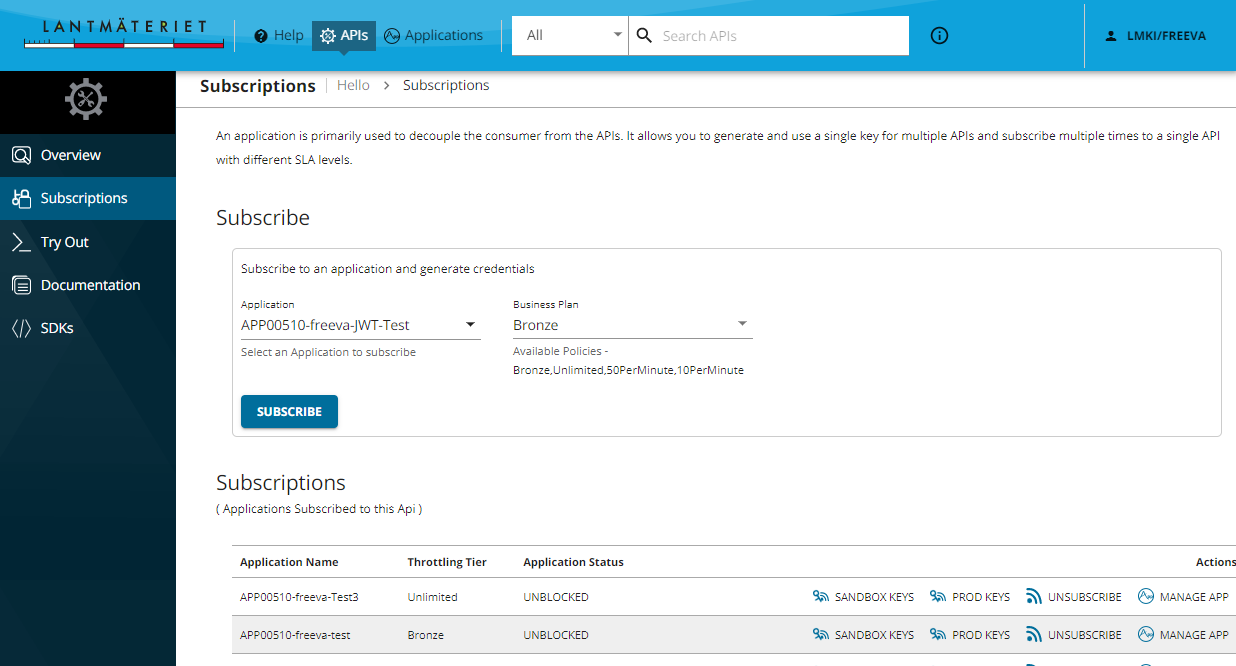 Here you'll see the resources exposed by an API and if they are protected by a scope. You can test an APIs resources by choosing an Application that is subscribed and by authenticating using one of the security mechanisms the API has been published with.

Click on an API resource to expand and test it. 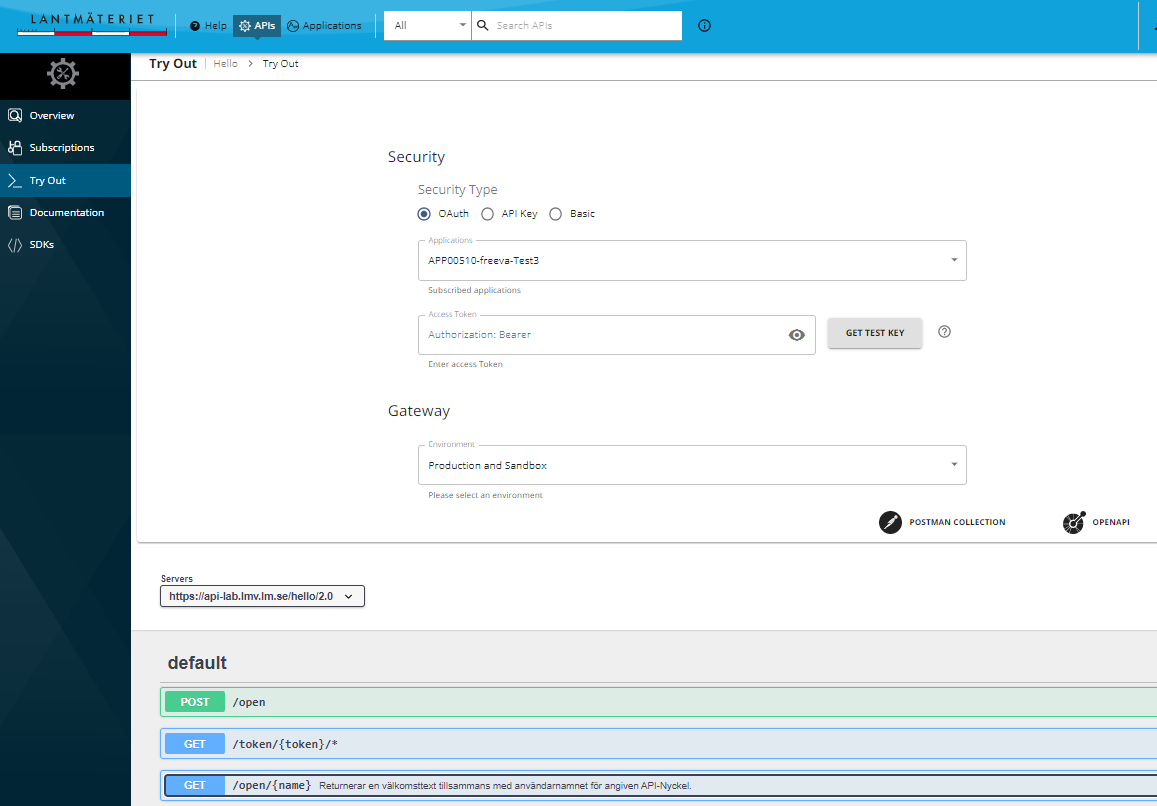 If an API consumer wants to build their own application they can generate an SDK containing the client code based on the programming language of choice, making integration with an API faster and easier.

The fundamental rule is to create a logical application for each physical application. Different applications want to consume different APIs and should therefore have their subscriptions and credentials managed separate from each other.

Click on the Application to display its overview page, see the example below and notice the navigation menu to the left:

Each application has a key pair, Consumer Key and Consumer Secret. This key pair are the applications credentials which are used when requesting Access Tokens to be issued.

You must generate the above Consumer Key and Consumer Secret the first time you visit your newly created application by clicking on:

You can also manage the lifespan of the different token types according to the needs of your application, read more under WSO2 - Changing the default token expiration time at the application-level. 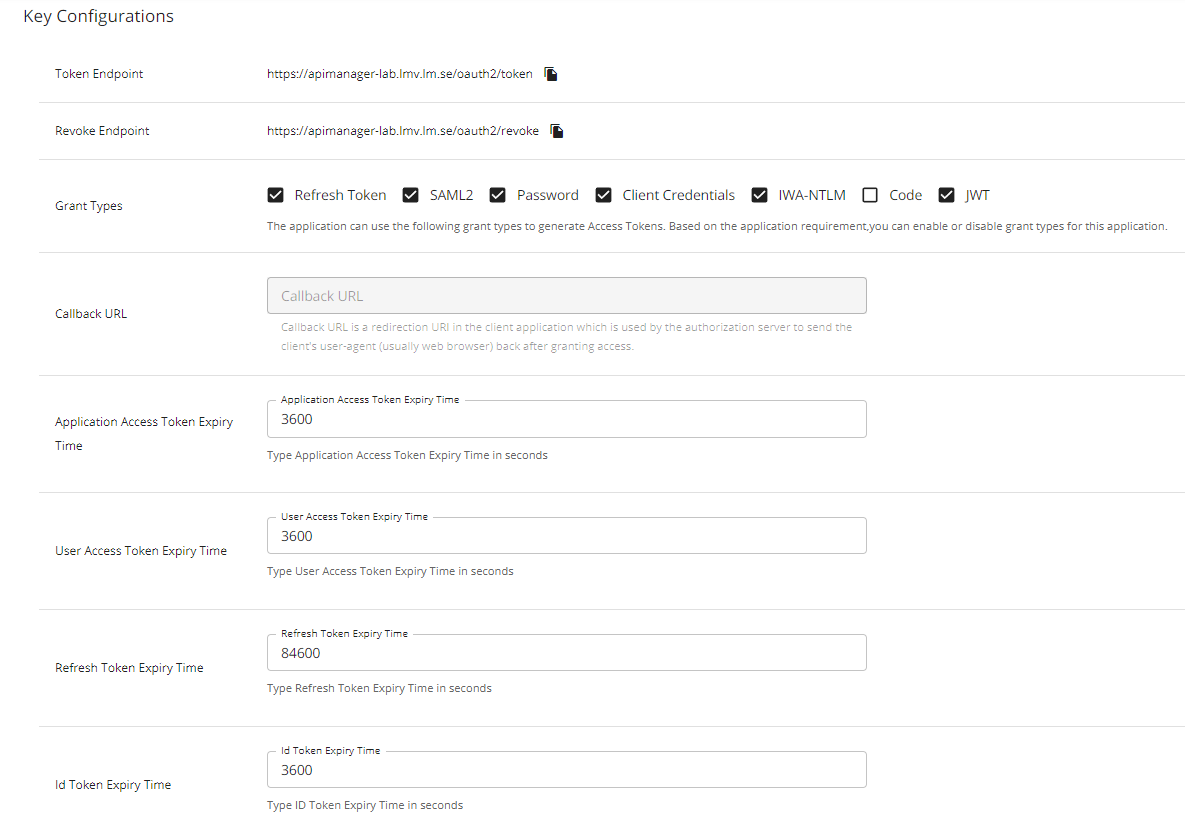 Here you manage the application's subscriptions. Notice that you can subscribe to APIs from here, see the example below:

This page describes a scenario where you as a consumer logs in to the API Portal, creates an application, generates API keys and adds an API subscription for said application.

The API Portal is available in the following environments:

The choice of Grant Flow is usually determined by the type of client and owner an Access Token should be issued for.

A trusted Client is created by a developer you know which means it can be trusted with your credentials.

A third party Client is created by a developer you don't know and therefore cannot be trusted with your credentials.

If it is a system that requires authorization, you should use the Grant Flow Client Credentials Grant.

If you require authorization from an enduser you'll need to make further considerations regarding what Client type to use.

The degree to which the client can protect information is the deciding factor when choosing Grant Flow:

If the client is 'trusted' use Resource Owner Credentials Grant.

If the client is a 'web application' use Authorization Code Grant.

This endpoint can be used whenever a Client wants to request an 'access_token' to be issued. The required parameters is determined by what Grant Flow is used.

This endpoint can be used whenever a Client wants to revoke/invalidate a previously issued 'access_token' or 'refresh_token'.

This endpoint provides keys that are used by Clients and Resource Servers to verify the signature and decrypt 'access_token' that have been issued as JWTs and similarily for OpenId 'id_token'.

This endpoint can by used by a Client to fetch metadata describing the Authorization Server.

This endpoint can be used by a Client to initiate a single logout at the Authorization Server.

If the Access Token is valid the API call is routed to the backend. Let us now imagine that the wrist band only gives access to a subset of the carousels that are available in the amusement park where access is determined by the color of the wrist band. One carousel requires a green wrist band while another requires a yellow wrist band. Since you have a green wrist band you will be denied access to the carousel that requires yellow. In the same way a Client can be denied access to an API if the Access Token is not issued for the correct Scope ie. it has the wrong color on it's wrist band.

Which Scopes a Client can issue an Access Token for depends on the roles/groups assigned to the Resource Owner, read more about these terms on the page Terminology. For more info regarding the issuing of an Access Tokens see the page Recommended Grant Flows.

When a Client has their Access Token issued they can come in different formats depending on when you created your application in the API Portal. In this section we clarify what these formats are and what you need keep in mind regarding their issuing.

In the response the Client can see which scopes the Access Token was issued for and for how long it can be used.

An Access Token that has the JWT format contains all the data needed to authorize a call from a Client. The JWT that the API Portal issues consists of three parts: header, payload and signature. This is encoded as a Base64URL according to <header>.<payload>.<signature> where each part is decoded into a independent JSON structure. Since a JWT is signed, a Resource Server can self-validate that it is issued by the API Portal by retrieving the public key from the JWKS Endpoint. The advantages of JWT can be summarized in that federation becomes possible as the JWT contains the data needed to authorize API calls and that response times are reduced as validation can be done without network communication with an Authorization Server. Below is an Authorization Server response to a Client requesting the issuing of an Access Token:

The only difference in the response compared to Opaque is the format of the Access Token. The decoded parts header and payload are shown below:

For Access Tokens where the Grant Flow is initiated by a machine see Recommended Grant Flows for more info. To generate an Access Token with Scopes via the API Portal, follow the steps below:

How do I know which Scopes my Access Token needs?

The Scopes required by an API are usually described in the accompanying documentation, another way to see which Scopes are required is to navigate to the Try Out console:

This Grant Flow is best suited for machine-to-machine communication when authentication of an end user isn't needed.

Preconditions: The developer provides Consumer Key and Consumer Secret (created in the API Portal) to the Client.

The Client sends a POST-request with the following parameters to the Authorization Server:

Example of a response with a issued Access Token:

This is suitable when you want to issue and access token for an end user and provide it to the Client. The basis of the Grant Flow is that the end user has sufficient trust for the Client to such a degree that their credentials can be shared with it.

Preconditions: The devloper provides the Consumer Key and Consumer Secret to the Client (the developer has created these in the API Portal).

The Client sends a POST-request with the following parameters to the Authorization Server:

Example response with two issued tokens, one Access Token and one Refresh token:

This flow should be used when you want to issue an Access Token for a end user and the Authorization Code Exchange is handled serverside by the application. Due to security considerations the Access Token, Refresh Token, Consumer Key, Consumer Secret shouldn't be exposed to a browser.

Preconditions: The developer provides the Consumer Key and Consumer Secret belonging to the Client, these keys and a callback URL have been created by the developer in the API Portal.

The Application redirects the end user to the sign in form on the Authorization Server with the below parameters:

Example of the Authorization Request (URL):

Example of the redirect back to the callback URL:

The Client exchanges the recieved 'code' for an Access Token by sending a POST-request with the following parameters to the Authorization Server:

Example response with two issued tokens, one Access Token and one Refresh token:

After an Access Token has expired you can use a Refresh Token to renew it.

A Refresh Token is only generated in the following Grant Flows: Resource Owner Credentials Grant or Authorization Code Grant.

Preconditions: Access Token has been issued with one of the following Grant Flows: Resource Owner Password Credentials Grant or Authorization Code Grant.

The current refresh token is revoked and a new one is generated with a new expiry time (default 24h), you must make sure to save the new refresh token in order to refresh an Access Token again.

Example of a cURL call with Refresh Token to issue a new Access Token:

You can revoke an Access Token or Refresh Token.

Example of a cURL call to revoke an Access Token:

The response will have the HTTP Status 200 with the following headers:

Note that if you try to revoke an invalid token you'll receive the HTTP Status 200 with the following headers: